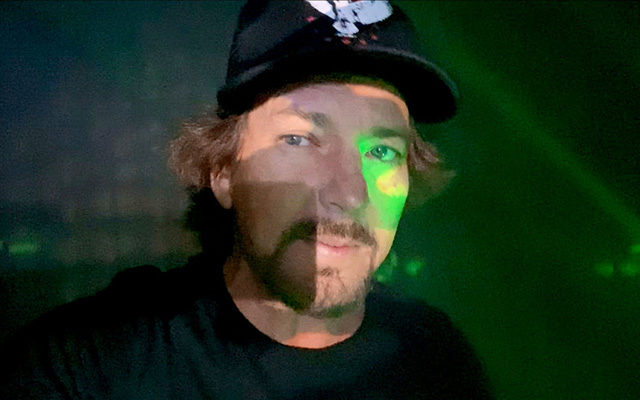 Eddie Vedder talks about his birth father and lots more in an interview with the podcast Daddy Issues.

Vedder opens up to the hosts, sportscaster Joe Buck and actor Oliver Hudson, about his birth dad, who died of multiple sclerosis in the early 1980s. He says, “By the time I found out who he was, he was no longer on the planet.” Before that, Vedder says his father was a family secret. He turns out to have been a musician and a singer. He says he feels his dad’s “spiritual energy” on stage from time to time.

Other memorable moment include when Vedder reveals that he and Bruce Springsteen have texted each other during the past few World Series, while watching the games from wherever they each happen to have been. The two have also texted Buck, who has called all those games for FOX, during those games — not that he’s been able to respond.

Vedder also spills the beans on an upcoming film music project with Sean Penn, who he last worked with on 2007’s Into the Wild. Penn is both directing and acting in an upcoming film called Flag Day, about the daughter of a con artist struggling to come to terms with her father’s past. According to Vedder, Penn plays the father, Sean’s daughter Dylan plays the daughter, and his son Hopper is also in the film.

Vedder says he, Irish singer Glen Hansard, who starred in the movie Once, and Atlanta-based singer Chan Marshall (a.k.a Cat Power) are doing music for the film. He says Hansard had come to L.A. to work with Penn, but immediately had to return to Ireland because the country was closing down due to the pandemic. Vedder says he’s “not sure when or how” Flag Day will come out.