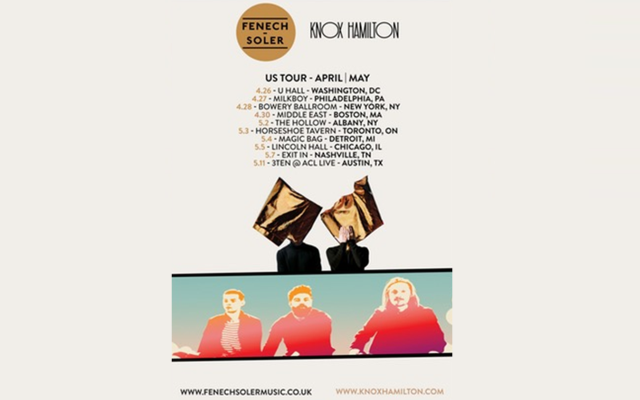 Fenech-Soler & Knox Hamilton are coming to the Doug Fir Lounge

Glastonbury 2011. As Fenech-Soler’s set draws to a close in a packed tent filled with people who knew and adored their songs, the band’s four members experience a flood of emotions. Fenech-Soler had reached a point that all young bands dream about- huge label backing, play-listed at BBC Radio One, a sold out tour and a premiere set at UK’s most storied festival. This set marked not just the precipice of major success but also, the beginning of their enforced break as a band.

Fueled by the similar staples within their collective musical taste, the members of Knox Hamilton blend laid back guitar riffs and catchy bass lines with rhythmic drum beats and soaring vocals to produce a sound that’s as likely to make you want to visit the beach as it is to move your feet. The Great Hall EP is a culmination of the bands eclectic musical sensibilities, as individuals, and their combined infatuation with indie pop rock, as a band. The EP could easily be trimmed to simple, commercial-length soundbites, but it could also accompany you on a cross-country road trip.