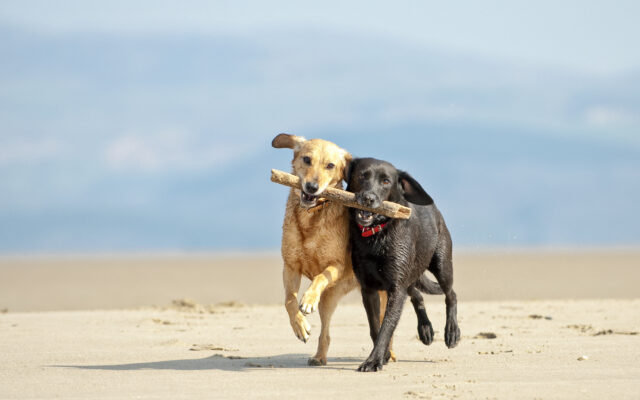 1.  A die-hard Tennessee Titans fan named Chad Davis went to their game on Sunday, and lost his Titans-themed wedding ring while he was there.  But then he posted a photo of it on social media, and the team’s CEO messaged him back to let him know they found it.  It’s a blue-and-silver ring with the Titans’ logo on the side.

2.  A farmer in Germany got 700 goats and sheep to line up in the shape of a giant syringe to encourage more people to get vaccinated.  She did it by sprinkling food on the ground, and took a picture with a drone.

3.  Two missing hikers in Oregon were rescued on Saturday after drawing a big S.O.S. message in the snow.  They’d been out in the elements for about a week.

4.  An 80-year-old guy in the U.K. named Aflie Kitson briefly went viral last month, because a video showed his little dog picking up litter while they were out on a walk.  He’s trained her to pick up water bottles and put them in recycling bins.  Each time she does it, she gets a treat.

Anyway, the video made the rounds in England.  And it ended up reuniting Alfie with his long-lost siblings.  His brother is 84, and his sister is 71.  They lost touch after he moved to Spain 20 years ago.  He recently moved back to the U.K., but didn’t know how to contact them.  Now they’re back in touch.