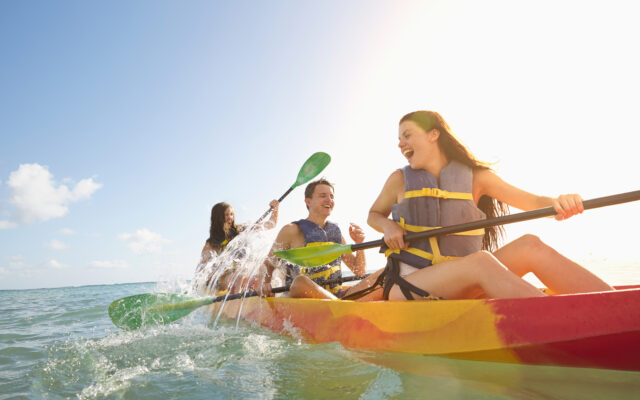 1.  A grateful Burger King employee at the Las Vegas airport showed off the lame gift bag he got after 27 years on the job without missing a day.  It included things like a lanyard, some pens, and two rolls of Lifesavers.  (???)

Since he’s in the airport, he actually works for the company HMS Host, which contracts him out to Burger King.  And even though HE was grateful, people online thought he deserved more.  So someone started a GoFundMe for him.  Last we checked, people had donated over $35,000.

2.  A guy in England found an iPhone in a river this month while canoeing with his family.  And his first thought was there might be some irreplaceable photos on it.  So he dried it out . . . got it to work . . . and tracked down the owner.  It turned out a guy from Scotland lost it in the river last August, and it had been there 10 months.

3.  An American “artistic swimmer” named Anita Alvarez passed out at the World Championships in Hungary on Wednesday, and sunk to the bottom of the pool.  But she’s okay because her coach dove in and pulled her out.

4.  An elementary school in New Jersey threw a big going-away party this week for a crossing guard.  Her name is Claire Bauman, and she’s finally retiring at age 94.  She’s been a crossing guard at the school for 57 years.  She started in 1965.