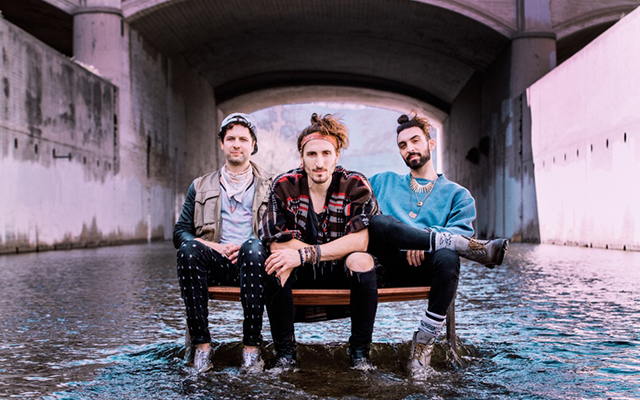 Magic Giant represents the union of three distinct, dynamic, and diverse artistic voices. Since his childhood in Washington, D.C., Austin obsessively pursued his love of songwriting. He studied classical composition and then went on to write songs with artists ranging from John Legend to David Guetta. New Jersey native Zambricki got hit by a car in junior high, fell into a coma, and once he woke, miraculously learned violin in 4 days through a rare brain trauma reorganization now known as Acquired Savant Syndrome: “If I could go back, I’d throw myself in front of the car,” Zambricki chuckles. Later on he began writing and one of his first songs was featured in the Sundance-awarded film Paper Heart. Born and raised in Los Angeles to Persian immigrants, Zang learned upright bass in grade school before picking up guitar and studying dance. He caught the attention of Austin and Zambricki when they came across online videos of him salsa dancing and were instantly hooked.

The three are an unlikely match, but their magnetic chemistry can get any crowd moving, from a sold out show at the legendary Troubadour to a sunset music or yoga festival audience. The group has recently toured with bands such as Beats Antique, The Revivalists, and Mike Posner.