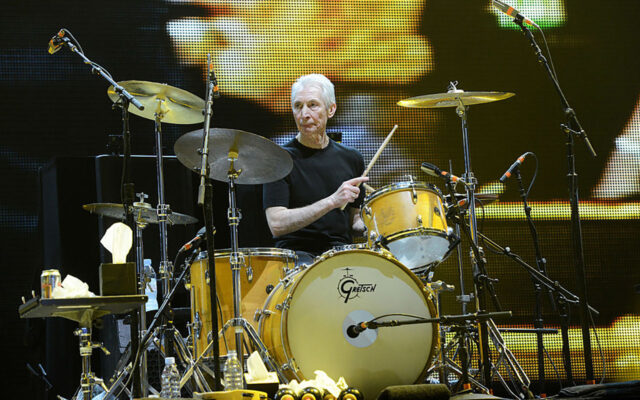 Charlie Watts of The Rolling Stones is dead at the age of 80.

The band issued a statement that says, “It is with immense sadness that we announce the death of our beloved Charlie Watts. He passed away peacefully in a London hospital earlier today surrounded by his family.”

It says he was “a cherished husband, father and grandfather” and “one of the greatest drummers of his generation… We kindly request that the privacy of his family, band members and close friends is respected at this difficult time.”

The band announced earlier this month that he wouldn’t be taking part in the Stones’ tour this fall, citing the need to recover from a recent medical procedure. Watts selected Steve Jordan, a member of guitarist Keith Richards’ group the X-Pensive Winos, to replace him for the trek.

Watts is survived by his wife of 57 years, Shirley Ann Shepherd, as well as their daughter Seraphina and granddaughter Charlotte.

Charlie Watts was born in London on June 2nd, 1941. He started drumming when his parents gave him his first drum kit in 1955.

Watts attended Harrow Art School and in 1960 started a job as a graphic designer for an advertising company called Charlie Daniels Studios. He also played drums in various blues and jazz bands during this time. He joined Alexis Korner’s Blues Incorporated in 1962 while keeping a day job with the advertising firm of Charles, Hobson and Grey.

In mid-1962 Watts first met Brian Jones, Ian Stewart, Mick Jagger and Keith Richards, and they finally got him to join the band in January 1963.

Watts played drums on every Stones album, from their 1964 self-titled debut (which was released in the U.S. as England’s Newest Hitmakers) up to 2016’s Blue & Lonesome. (But not every song, as producer Jimmy Miller played drums on “You Can’t Always Get What You Want” and “Happy.”)

Watts was known as steady and quiet member of the band compared to Jagger and Richards, and hid his addiction to alcohol and heroin in the mid-’80s until he got clean in 1986. That year he launched his jazz career with The Charlie Watts Orchestra. He went on to release nine more jazz albums through 2017.

Watts was diagnosed with throat cancer in 2004, even though he had given up smoking in the late 1980s. After undergoing radiation treatment he rejoined the Stones to make A Bigger Bang and then went on tour for two years. At the time he joked, “It seems that whenever we stop, I get ill. So maybe I should carry on.”